Just for fun I thought I would document the process of making a laminated Stripey Swirly Twist Pen. 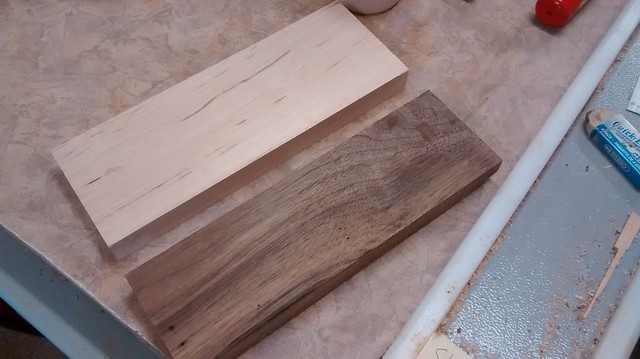 At the table saw, I ripped a bunch of thin strips from these maple and walnut scraps I had lying around. 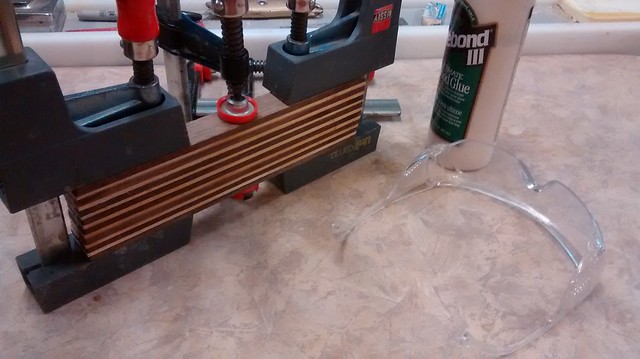 The maple and walnut strips were alternately glued together and clamped up to dry overnight.

Laying Out the Blanks 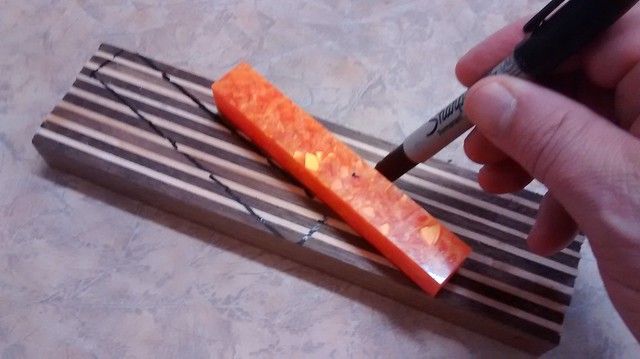 Using an acrylic blank I had nearby, I layout the blanks at an angle. Should be able to get two or three pens out of this. 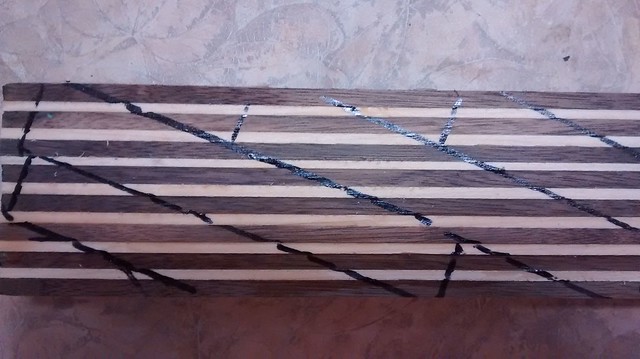 Shows the lines for cutting at the bandsaw.

We Have Pen Blanks 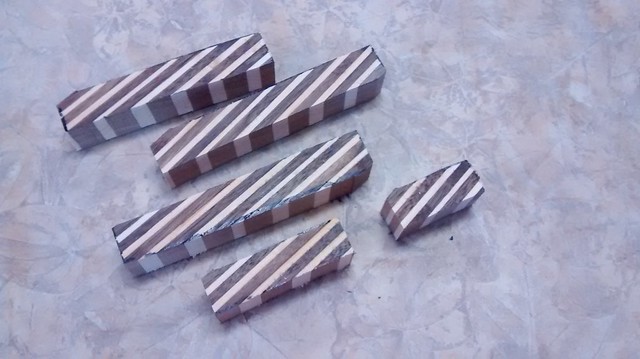 Blanks were cut at the bandsaw. Two full length ones, for sure, and I can probably use the other bits for something, at least one more pen I think. 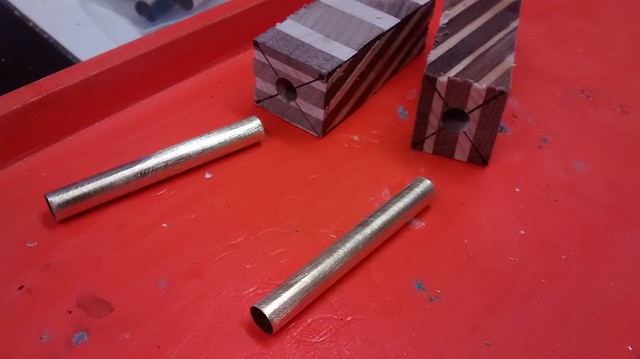 Blanks were cut to just a bit longer than the tubes, a 7mm hole drilled through each at the drill press, and now the tubes can be glued in.

Tubes In and Trimmed 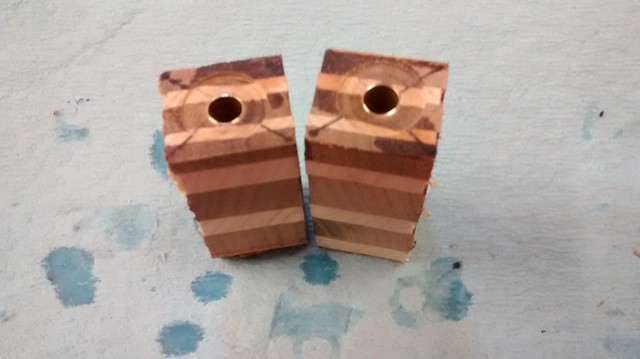 Brass tubes are glued in place, and the ends trued up with the barrel trimmer. 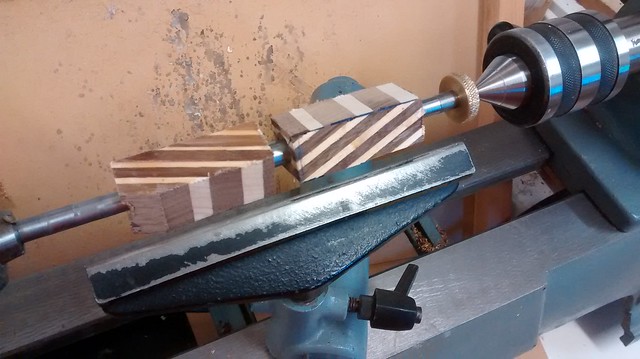 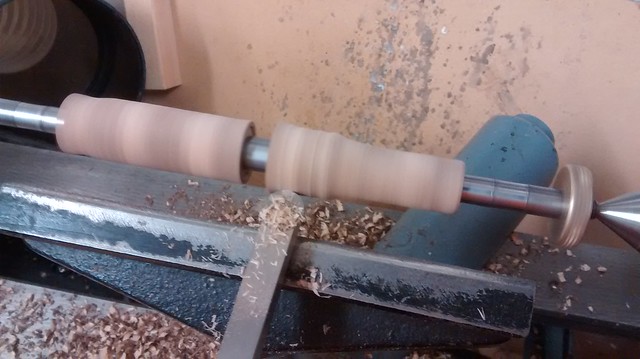 Only with the flat-bottomed Easy Wood Tool, and only after the initial rough turning to round, would I attempt the one-handed lathe action photo. 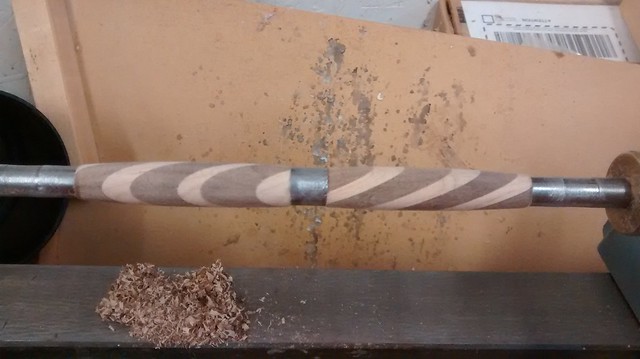 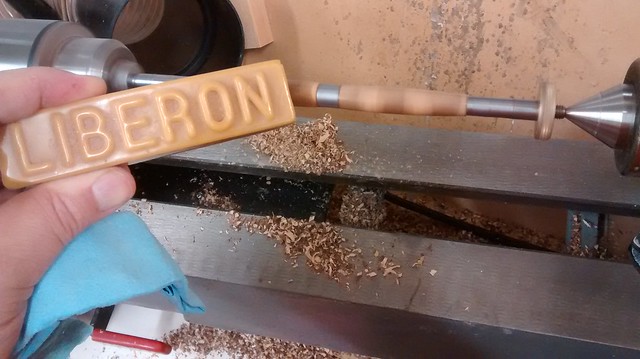 After numerous rounds of sanding, followed by the Australian part of the operation (EEE Ultra Shine and Shellawax Polish, “Australian and Proud Of It” – them, not me) I apply a final top coat of Liberon wax stick. 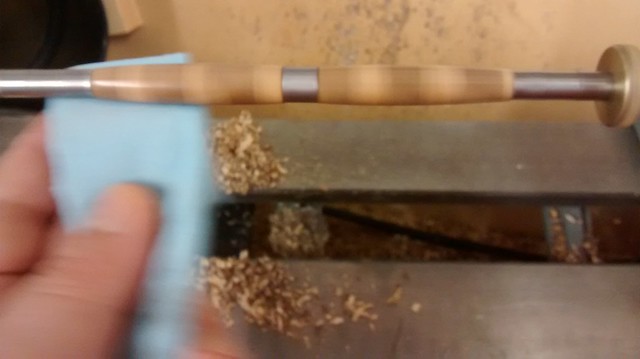 Buffing up the last coat of wax. 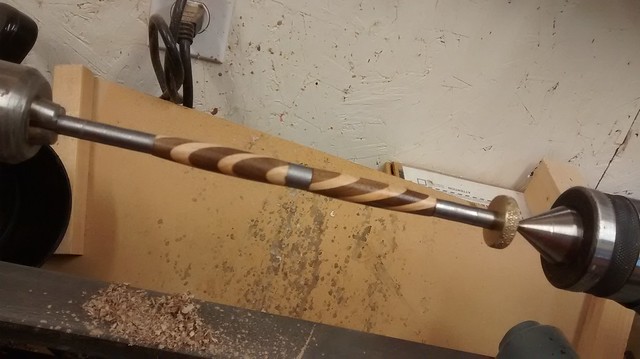 Finished with the lathe, ready to come off and be put together. 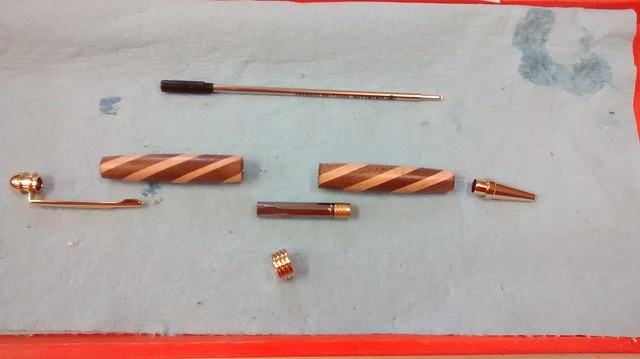 This kit has a manageable number of pieces, unlike some of the fancy schmancy kits, like rollerballs. 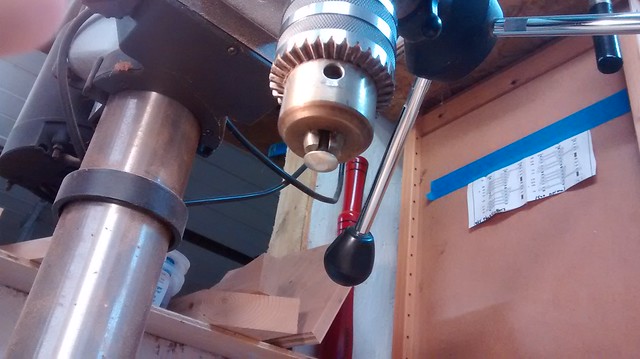 Grinding a flat spot on the head of a bolt and chucking it in the drill press makes for a pretty solid pen press. 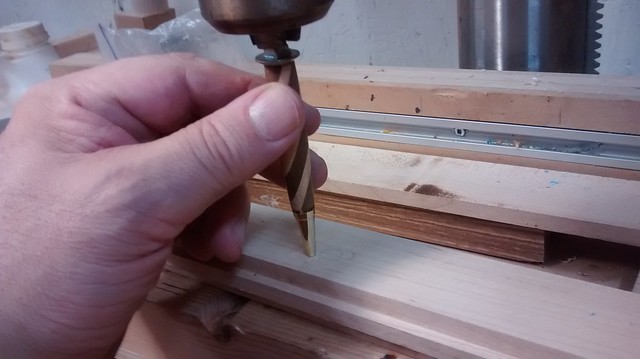 And if you’ve ever had your nib pressed, you know how painful that can be. 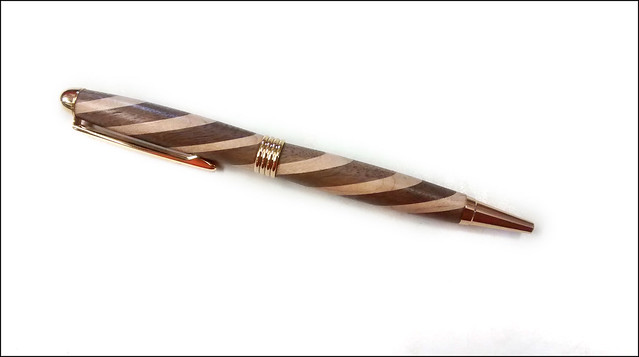 Two ballpoints in style Streamline, gold plating, with added stylus for use on phones and tablets. The wood is my old pal zebrawood. 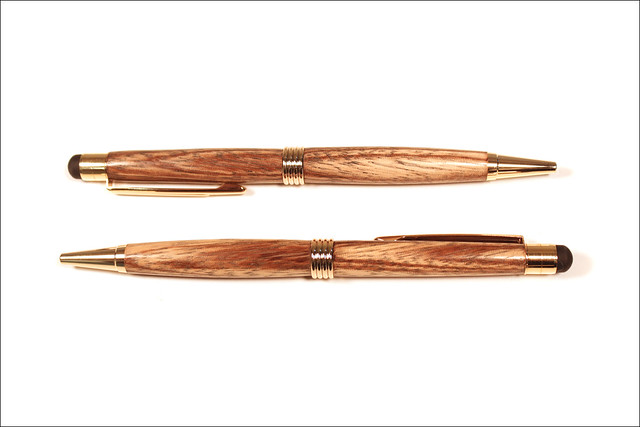 Two new pens, style is Slimline Deco in chrome plating, wood is purpleheart, and I replaced the standard end cap with a stylus tip for phones and tablets. Works on my Kindle too! 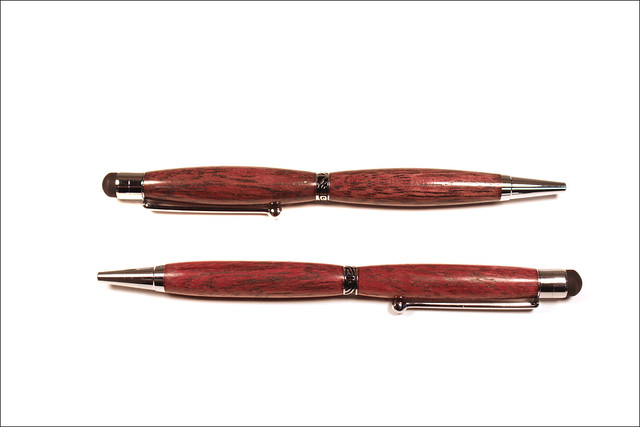 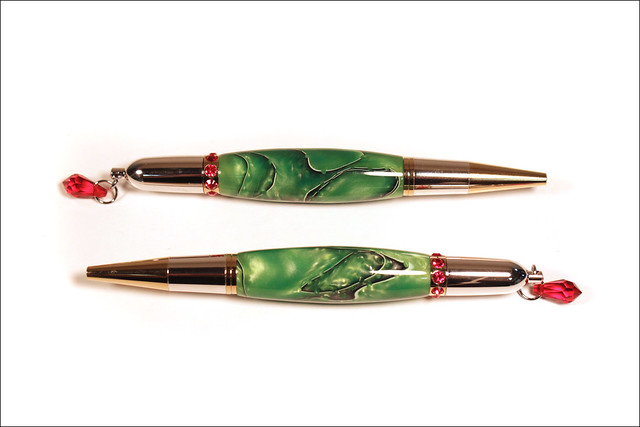 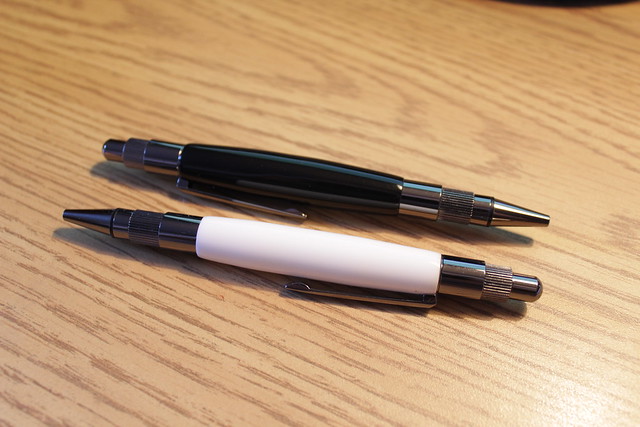 Here’s a Stratus click pen I just made, in white acrylic called “White Wedding” for some reason… I guess “Plain White” lacked pizzazz… The plating is “gun metal”, which has plenty of pizzazz. 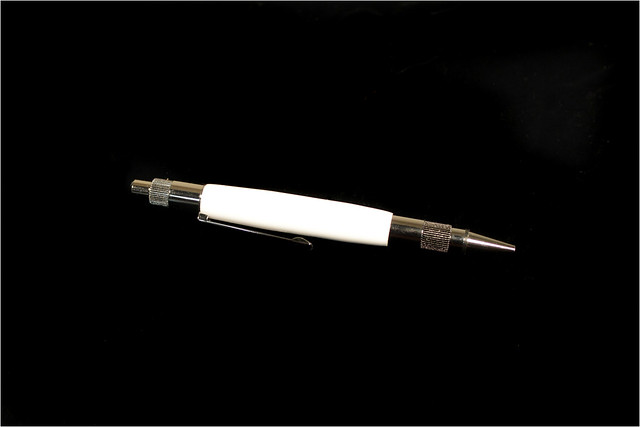 I usually photograph these things on a white background, but all that white on white just sounded too… white… so I trotted out the black velvet, for another song reference…

Here are a couple of pens I just finished. 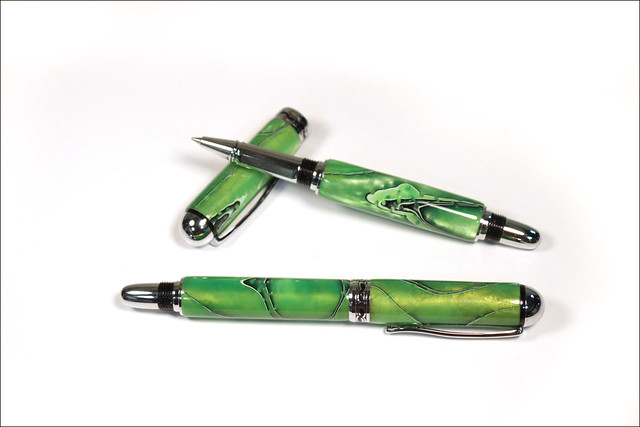 One of these is going to our landscaper guy, he says it matches his company colour. The pens are Sedona rollerballs in chrome plating, the acrylic colour is Cosmic Green. 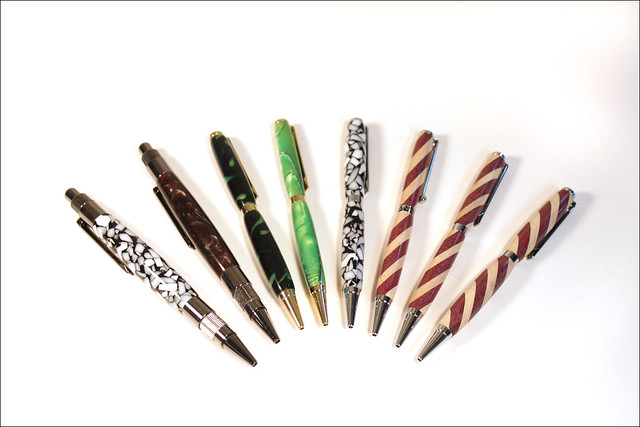 Two “Stratus” pens on the left, the rest are “Slimline” (with one “Slimline Elegant”). The three stripey ones on the right (including the “Elegant”) are from my own bias-cut laminations of walnut and maple. The others are acrylic. 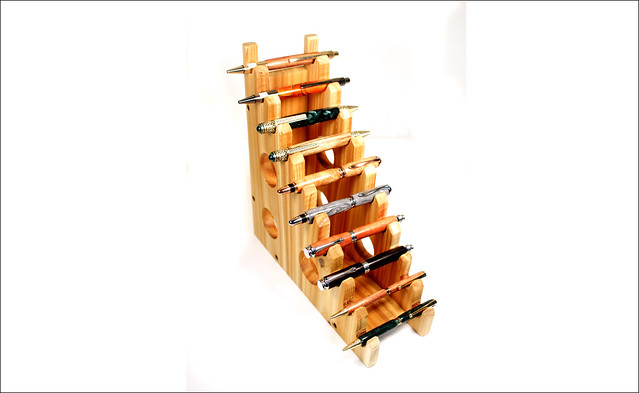 And because space can be a bit limited on the table at Market Days, depending on what I’ve got on offer (cutting boards, for example, take up a lot of room), it made sense to “go vertical”.

I probably ought to make another one, now that I’ve made the template…

Here are some more recently turned pens, as I get ready for the December rush (he said, hopefully). 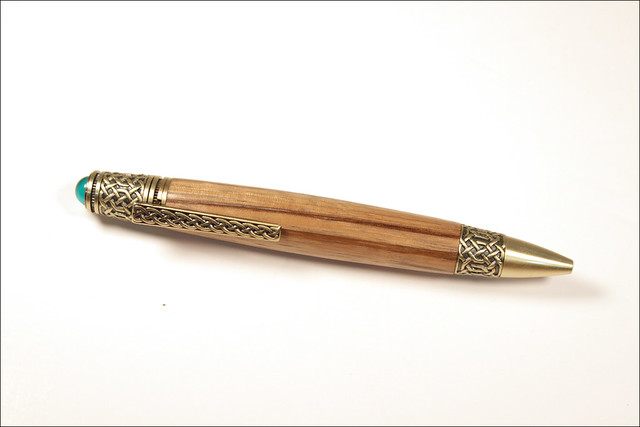 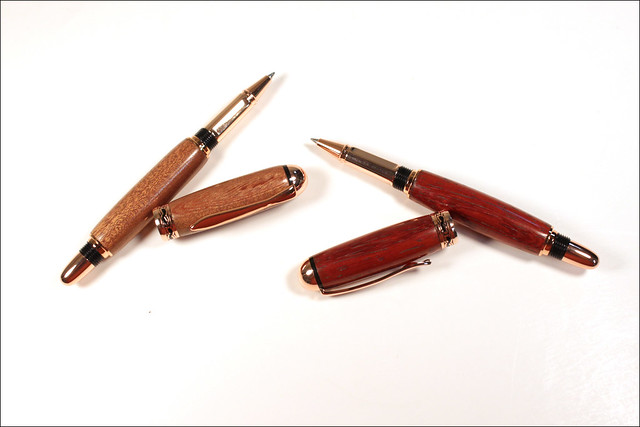 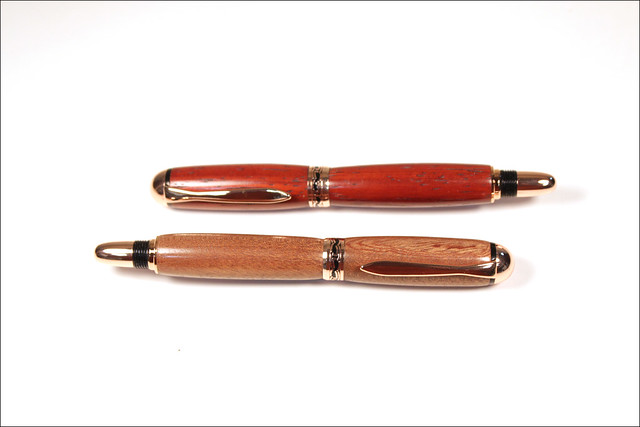